Warning: Use of undefined constant zframe - assumed 'zframe' (this will throw an Error in a future version of PHP) in /home/veenstra/public_html/wewed/wp-includes/widgets.php on line 413
﻿ Now I know how Sauron felt… | We Wed

Now I know how Sauron felt…

Note: No, this is not a recap yet, so sorry to disappoint! I’ve got a couple of last-minute posts I ran out of time for in the days leading up to the wedding, but patience is a virtue. Or so I’m told.

When Mr. Bunting got his passport, a few readers noticed something suspiciously shiney and silver in the photograph of Mr. Bunting. First, I commend those of you who noticed! You are all like wedding piranhas, sniffing out all the little wedding-related details. If Waldo wore a veil, you would find him without fail every time. 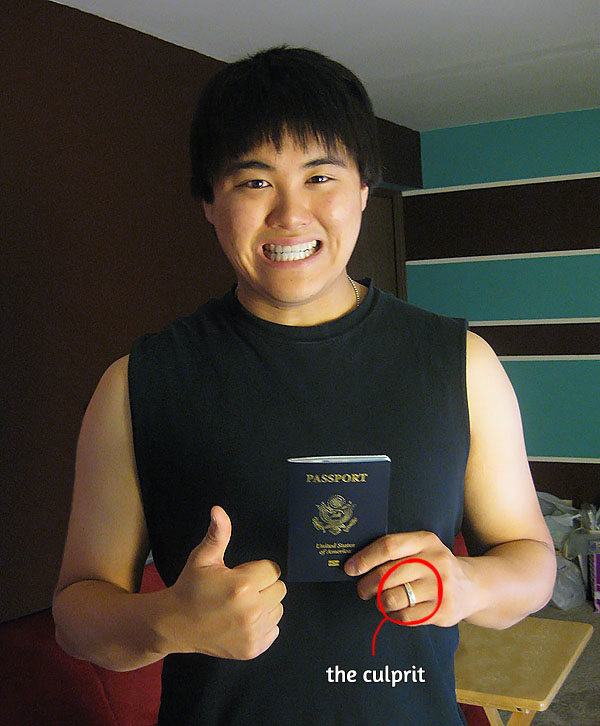 While it so clearly resembles a wedding band, I assure you that I did not cave and let Mr. Bunting wear his wedding ring before we were officially wed.

So this is the story about a friendly jaunt that I took to the next level.

It started before we were even engaged, really. When we first went to not-so-innocently, ahem, “admire” the current designs of engagement rings, Mr. Bunting commented how it was unfair that the woman would receive such an expensive token while the man received nothing. I laughed, made some snarky reply about how the man got to marry the woman and that should be prize enough, and then was immediately distracted by all the shineys. Mr. Bunting purchased an e-ring and brought it home while we both tried to non-nonchalantly act like I didn’t know. (I totally did.)

After that day, time passed without a further word on the subject.  I now realize that Mr. Bunting was avoiding all wedding and engagement talk like the plague because he was secretly hoping I would forget he had an engagement ring hidden away. Ha, as if! Yet several months flew by and then Mr. Bunting was on one knee while my jaw was gaping in complete surprise. I hadn’t forgotten about that lovely, sparkly little ring mind you, I just didn’t know it would come out of hiding so soon! 1,000 points for Mr. Bunting!

For the next few days I floated around, showing off my new bling to everyone and anyone that had functioning eyeballs. And then Mr. Bunting brought it up again. Why didn’t the man get an engagement present? I thought about it some. Hum, he did have a valid point. I was proud to be engaged to Mr. Bunting and my engagement ring was a reflecting statement of that. It did seem rather unfair that the man rarely got a token to show off to the world, too. Except that I saw through Mr. Bunting’s jaunt for what it was: a thinly veiled disguise to get new “engagement” computer parts. Silly, clever Mr. Bunting! Well, there was no way I was going to buy him computer upgrades as an engagement present because I knew they’d be upgraded and replaced again in a few years. If I was going to get him a gift, it would be something that was meaningful and long-lived. Kittens*, anyone?

So I decided to get him a ring, since that’s what I had. Eye for eye, ring for ring. (Okay, that’s creepy considering what the first implies.) I wasn’t going to buy him any old ring, though. Hell, I wasn’t even going to buy it. I was going to make it, no, forge it. 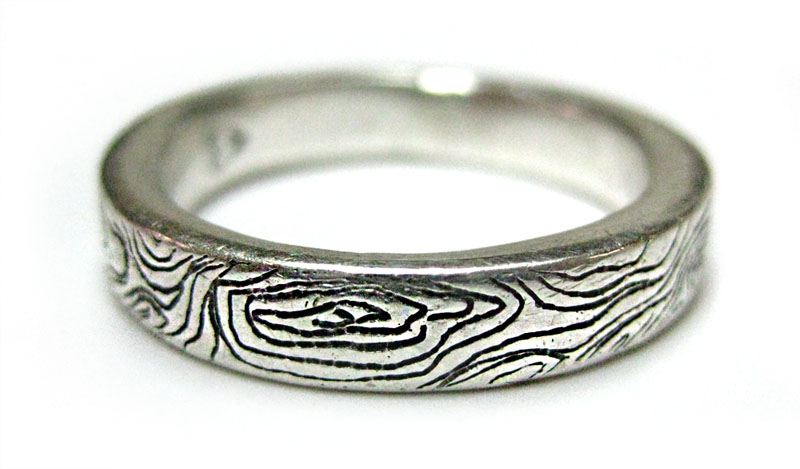 My father had made their wedding bands in his college jewelry class, so the idea was not new to me. (Now that I think about it, I made Mr. Bunting’s ring in the same building my father made his wedding bands in.) I had never taken our art department’s basic metals and jewelry class, so I had no idea where to begin. Enter my good friend, C, who was currently in the class and knew the ropes. I bought a length of sterling silver, and with his help, began constructing a ring.

To those who have never made a sterling silver ring without the use of a mold – it is hard, hard work. I had a large anvil and I had a hammer. So I hammered. I shaped. I hammered and shaped, all the while cracking jokes about forging The One Ring and feeling pretty epic about the whole thing. (Mr. Bunting was oblivious and still dropping none-too-subtle hints about the newest computer thingamabob.) 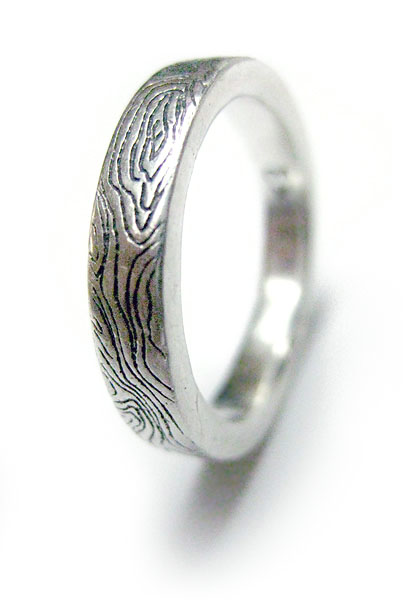 When I had the rod flattened out, it was time to get Mr. Bunting’s ring size. I had no idea what it was, but C and I came up with some lame excuse to get Mr. Bunting to try on the sizing rings in the shop. I don’t remember what we told him, but it worked and we had his size without revealing anything. C helped solder the two ends with a blowtorch, and it was back to the hammer and anvil for me! I hammered more. I shaped more. I hammered until I was sick of hammering and all out of Lord of the Ring jokes. And then I hammered some more. Finally, I put the hammer down and picked up the sandpaper. Now re-read the last handful of sentences and replace the word ‘hammered’ with ‘sanded’ and you get the general idea of that laborious task.

The perfectionist in me wasn’t satisfied until I had that ring as polished and smooth as an amateur human hand could possibly get it. And I looked upon that ring with great pride. Yet, it still wasn’t finished. I had to go and drop it in acid.

I had a one-chance shot with the acid etching I was planning, and there was no way I was going to finish it only to discover it didn’t fit Mr. Bunting’s finger properly. Up until this point the ring had remained a secret to Mr. Bunting, but I reluctantly admitted it was time to confess. So Mr. Bunting, shocked and delighted with my secret scheming, tried it on. It was a little too big. Good thing I checked! I cut out a piece, soldered it back together again, more hammering and sanding, and then finally we had a good fit. 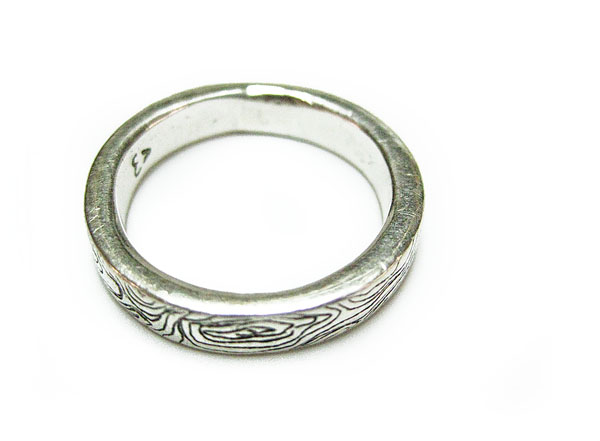 Time to play with acid! Sorta. I covered the entire ring in a black substance that acts as a barrier against acid and then I used a needle-point to draw out a design on the surface. The needle scratches away the resist so any exposed silver will be eaten by the acid. An hour or so in the acid bath followed with a cleansing wash, and ta-da – an etched engagement ring for Mr. Bunting! To really make the etching stand out, I added a quick petina that filled all the little grooves with a thin layer of black and…. It. Was. Finished. Hurrah!

The design was inspired by fingerprints and wood grain. And what geek’s ring would be complete without a <3? 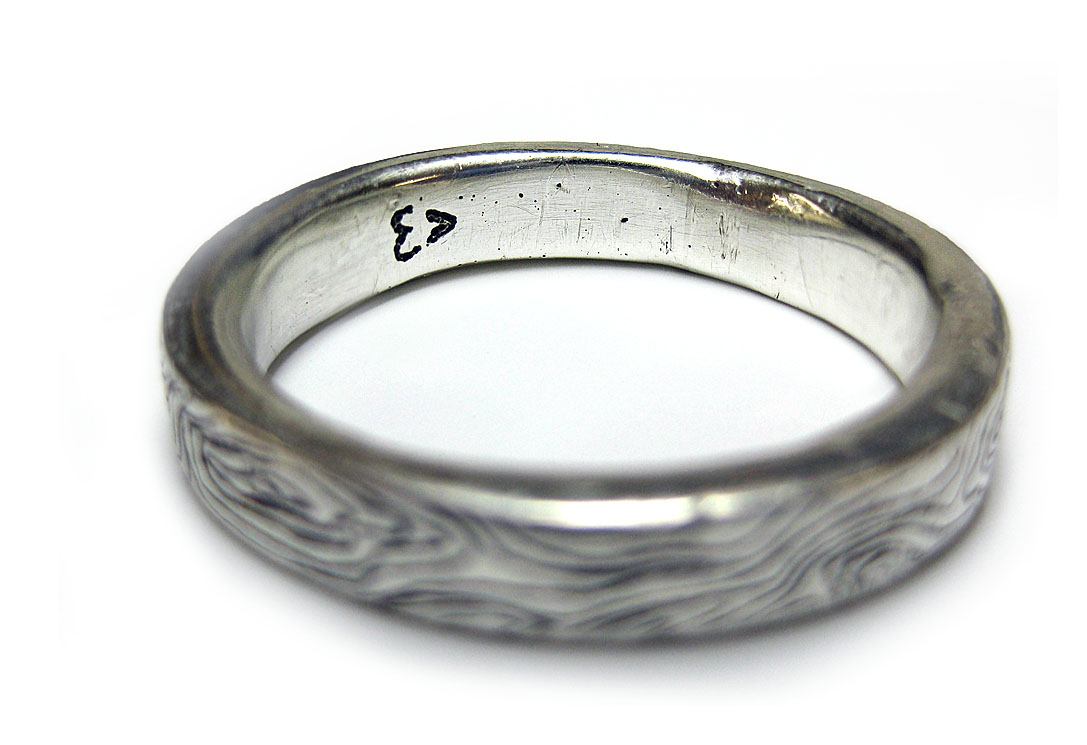 The ring isn’t perfect. It never was, it never will be. And after being subjected to a year and half worth’s of wear and tear, it’s even less perfect than when it started. These handmade imperfections, coupled with the scratches and dings from its engagement adventure, are qualities that make it exceptionally unique and personal to us. We wouldn’t have it any other way. 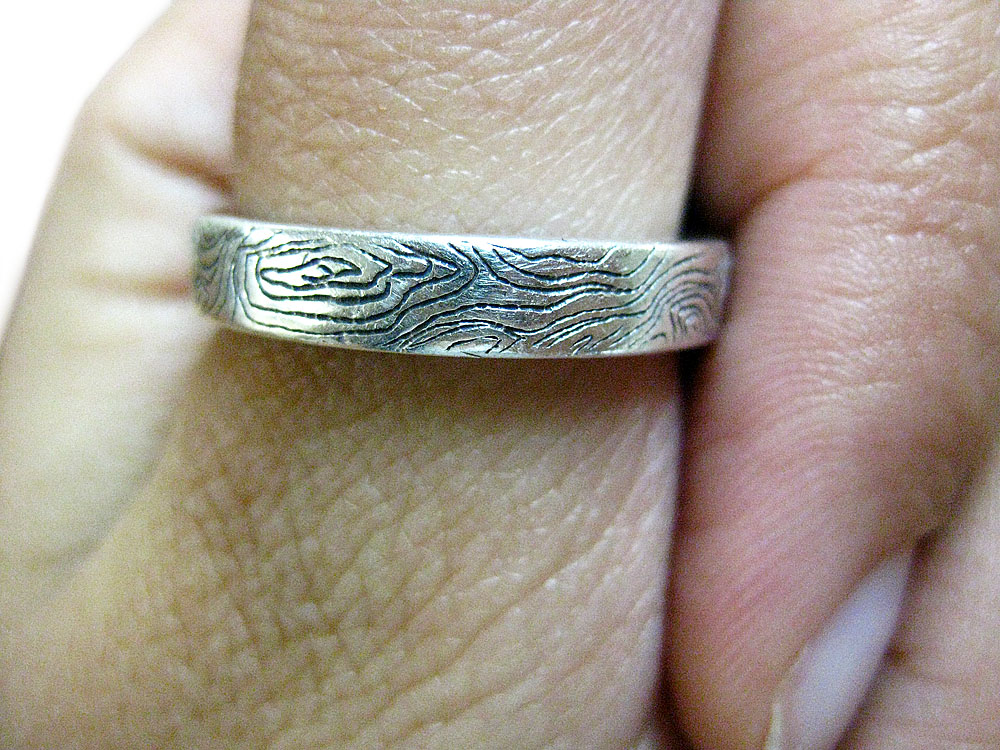 Making this ring was hard work that took the majority of a good week and a half, but it was so incredibly fun and I absolutely love telling everyone that I made Mr. Bunting’s engagement ring. And the best part was that for the rest of our engagement, we could both float around showing off our bling.

Did you get an engagement present for your partner, or are you planning to?

*Just kidding! I don’t endorse the use of kittens as gifts, unless the giftee: a.) loves kittens, b.) is financially responsible, and c.) emotionally available for a surprise kitten. In which case Mr. Bunting fails the last one. My two cats press his sanity enough as it is.