Warning: Use of undefined constant zframe - assumed 'zframe' (this will throw an Error in a future version of PHP) in /home/veenstra/public_html/wewed/wp-includes/widgets.php on line 413
﻿ The Bunting Bash: Two-by-two-by-two-by-three | We Wed

Soon enough, it was time for the wedding party to march down the aisle and assume their positions at the head of the trellis.

Brother Bunting led the men out of the building. Doesn’t he look so happy? 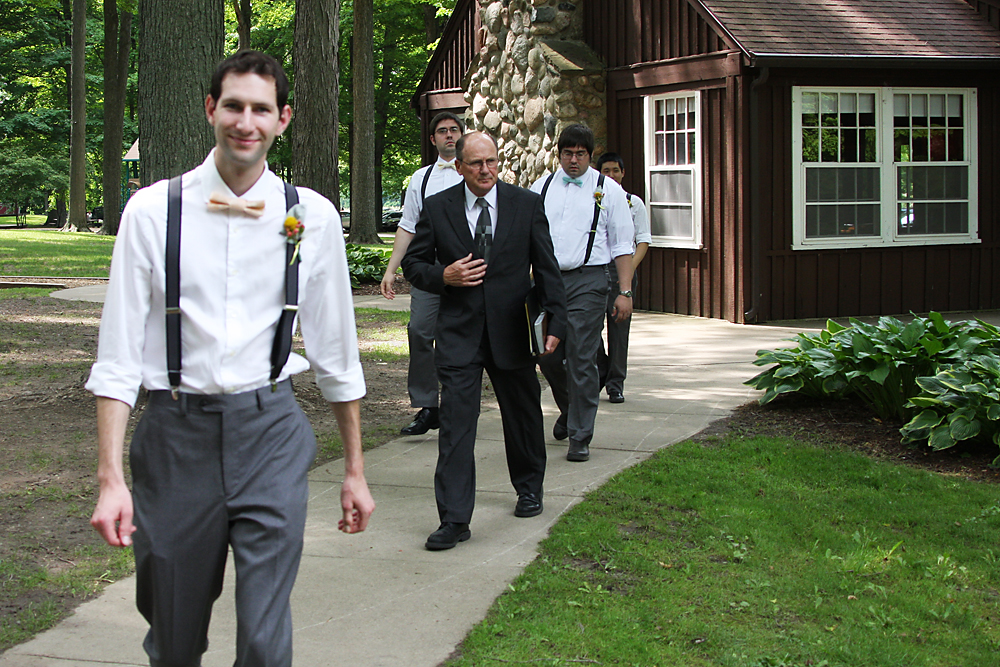 The couples paired up with one another, then went down the stairs and along the path that led to the start of the aisle. That’s our Master and Mistress of Ceremony making sure all is going smoothly down below. 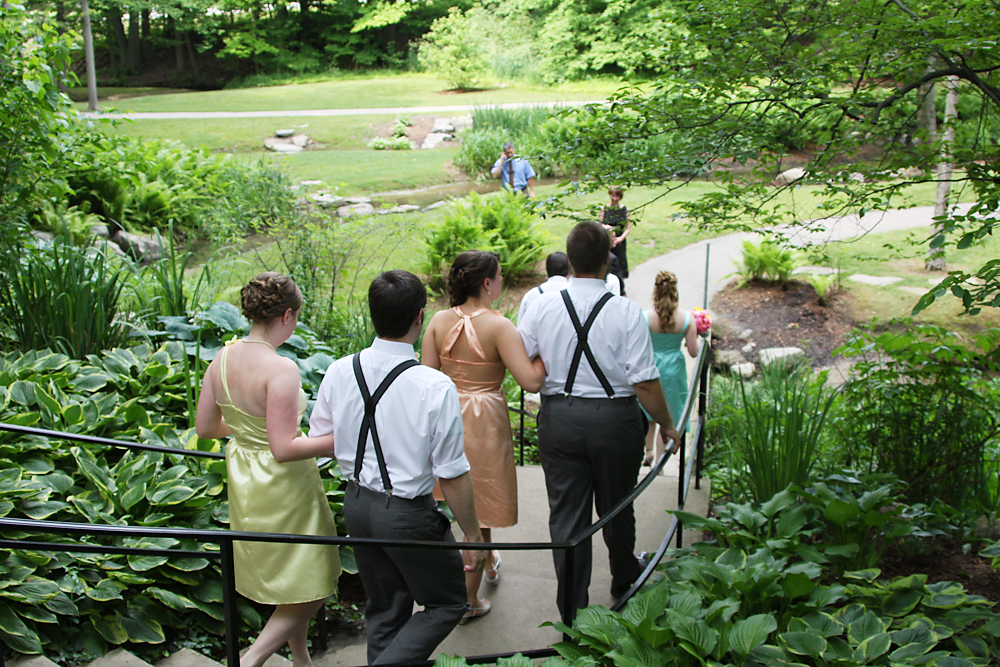 We had subtle background music playing as our guests mingled and found their seats, but when it came time for the wedding party processional a carefully selected song began to accompany them.

But just before the wedding party came around the trees and into view of our guests, Mr. Bunting and our officiant proudly strolled down the aisle. 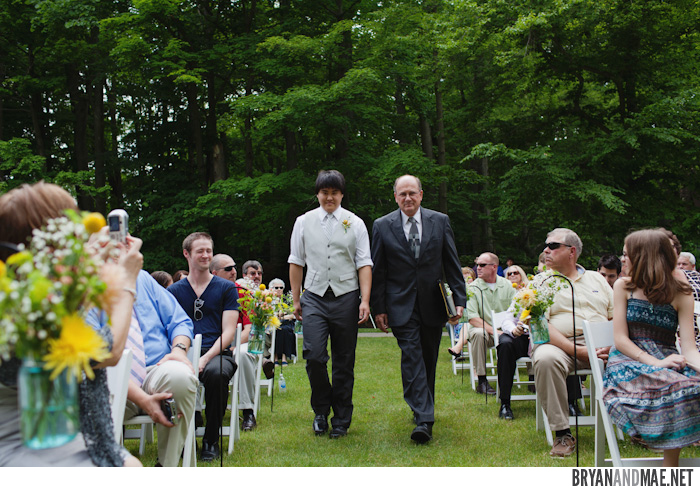 They were followed by Brother Bunting, his fiancée, and a second groomsmen. We had four bridesmaids and five groomsmen, so Bridesmaid M had a double escort. She wasn’t worried about tripping and falling with two men to catch her! 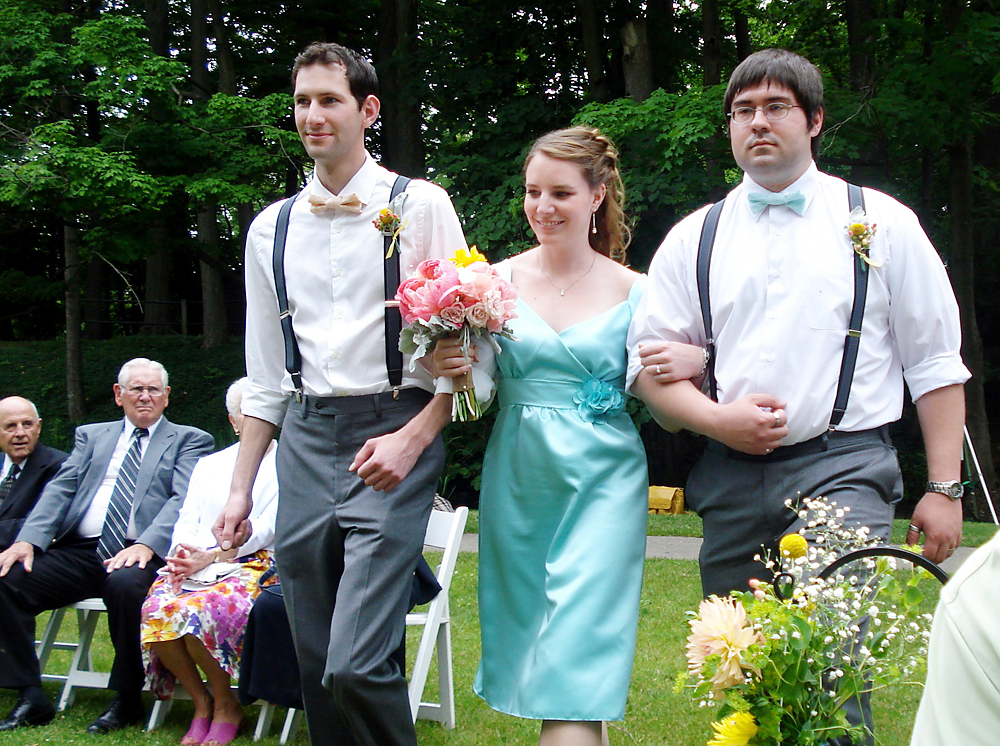 One thing we overlooked was the width of the aisle. It was wide enough for two people, but our trio had to dodge the blue jar floral arrangements. That’s definitely something to think about if you plan on tripling up at all. 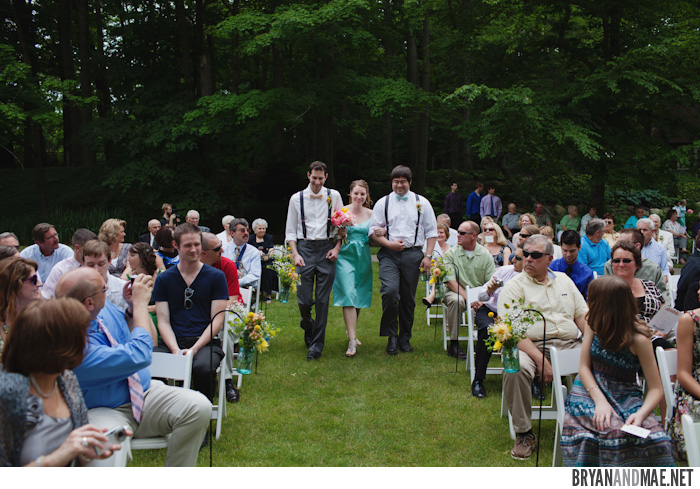 The next pair followed suite. These two were married earlier in May! 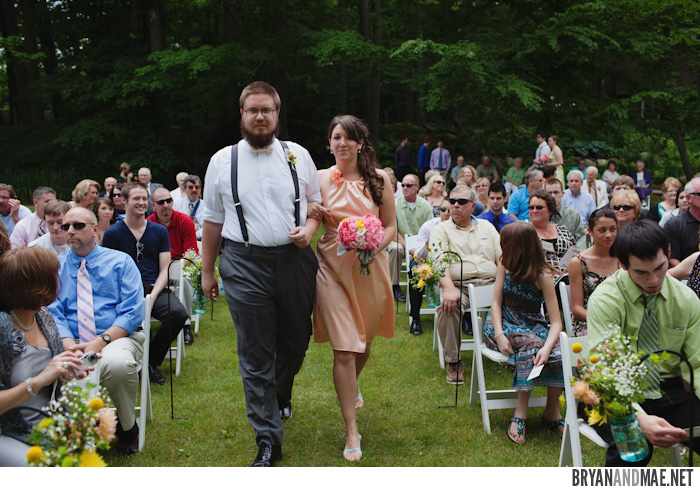 Our third pair are also married to each other. There is so much love in our group. 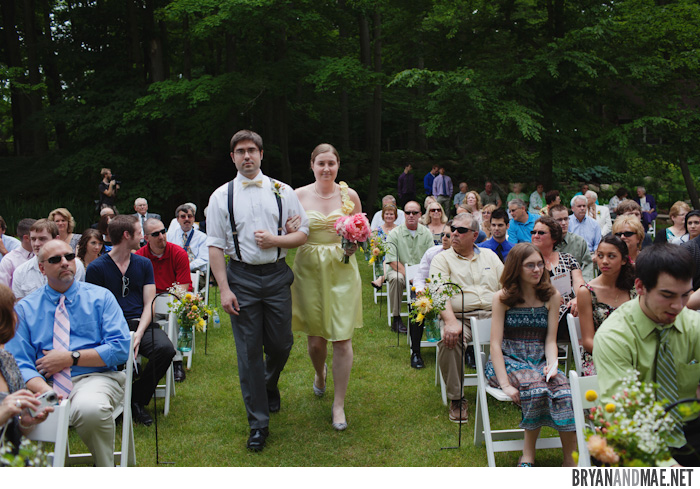 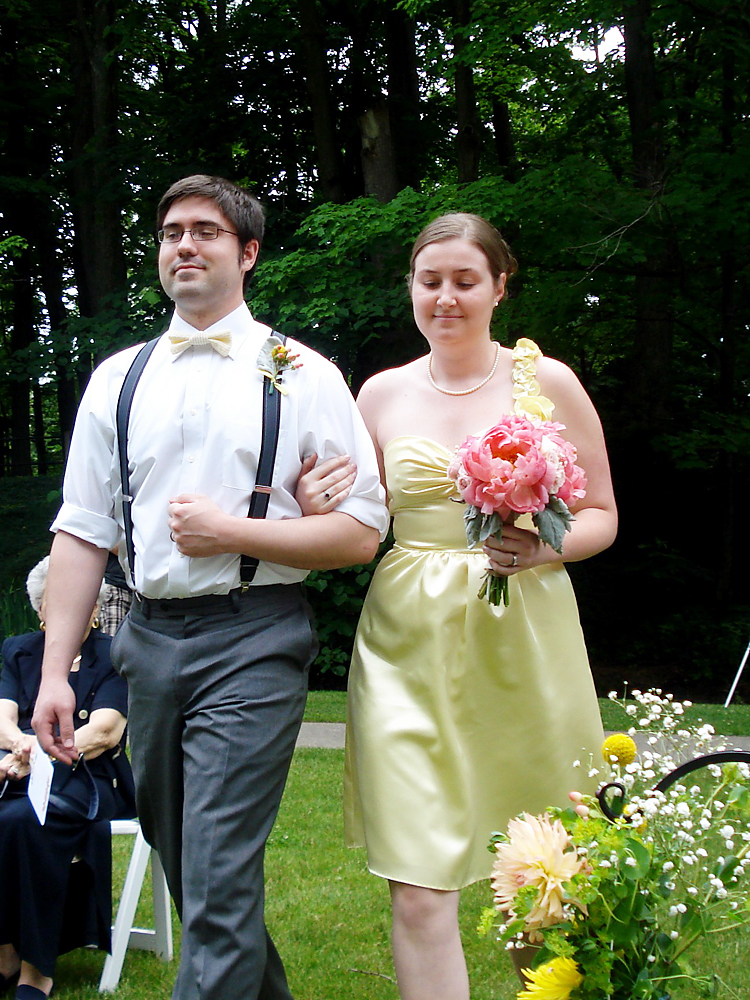 Then it was our final and last pair, Bestman Bunting and my best-friend-since-childhood MOH Bunting. 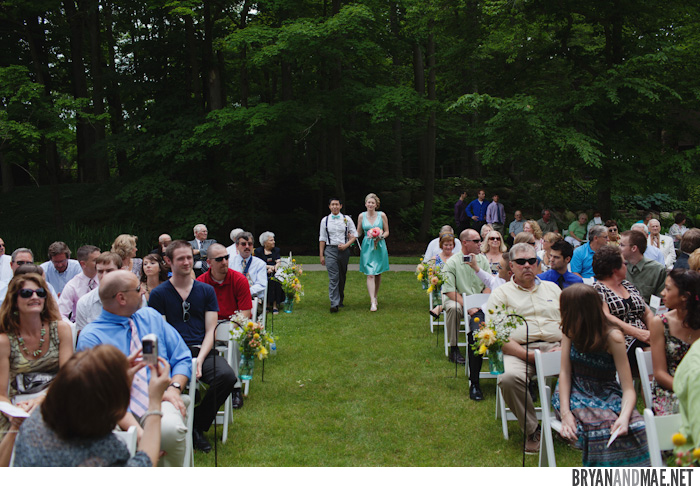 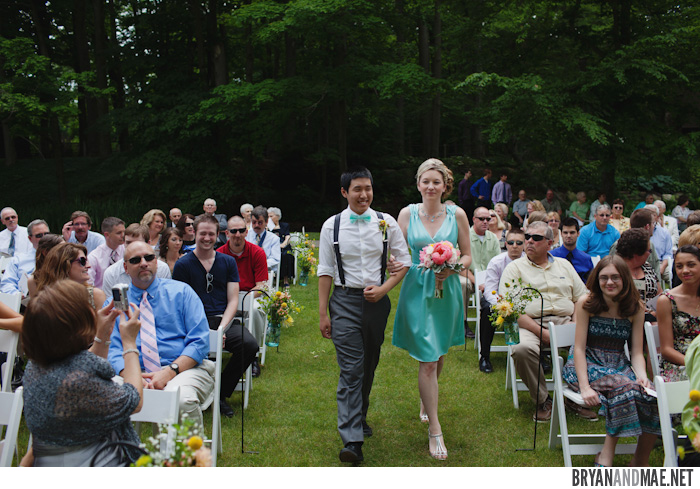 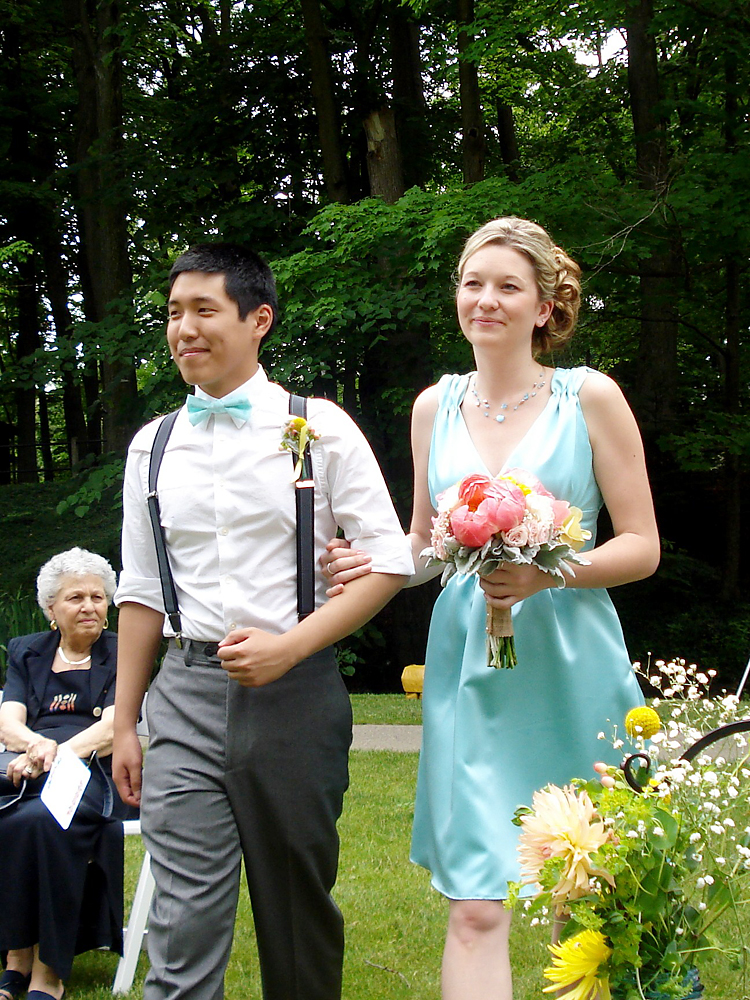 At long last, the wedding party was in position and the music slowly shifted into the bridal processional. 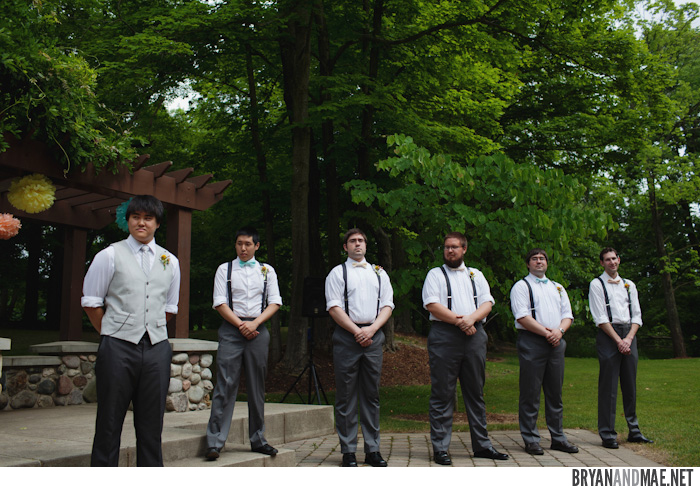 The bridal processional music continued, yet there was no sign of the bride.

Several guests shifted in their seats as everyone craned their heads around, waiting expectantly. Our wonderful DJ looped the intro of the song, gracefully extending the length without being overly obvious. And still no bride. Our officiant cracked a good-humored joke about how Mr. Bunting might be off the hook after all. 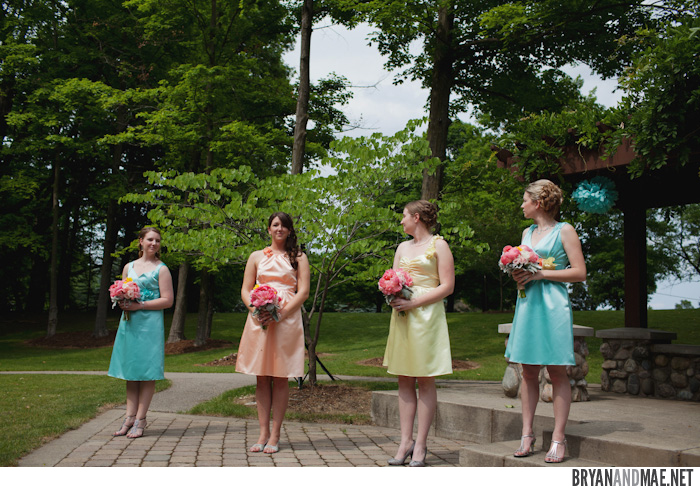 You can tell the bridesmaids were starting to wonder where I was by the way they looked at each other.

Uh-oh…. what’s going on and where is that Miss Bunting? You’ll have to wait to find out what happened until next post!

*All photos, unless stated otherwise, copyright Bryan and Mae Photography.