Warning: Use of undefined constant zframe - assumed 'zframe' (this will throw an Error in a future version of PHP) in /home/veenstra/public_html/wewed/wp-includes/widgets.php on line 413
﻿ In loving memory | We Wed

Three years ago on May 8th, Mr. Bunting lost his father. It was unexpected, tragic, and easily the worst day of our lives.

At 5am that morning, I had left with a group of classmates to go on a 2-month geology adventure to the canyonlands of the southwest. By the time I got the call, we were already several states away in our van. There is no greater feeling of helplessness than when your loved one is in need, and you can’t even be there. But I have amazing parents and they arranged an emergency return flight for me, so by 11pm I was finally pulling into his driveway.

I know the anniversary of his father’s death is, and always will be, a sorrowful time for Mr. Bunting. I also know that this year may be especially hard as our wedding day approaches, knowing is father won’t be there. I never once fathomed that we would be missing one of our parents when we finally exchanged vows, but you can never really see sudden tragedies coming.

I think it’s important to honor those who are with us in spirit at our wedding, especially since they have played such crucial roles in our lives. So I’ve taken it upon myself to find a way to incorporate his father into the wedding in a way that will commemorate his memory without detracting from the celebratory mood of the day. I already plan on including some memorial wording on our programs, but I almost feel as if that’s not enough tribute. 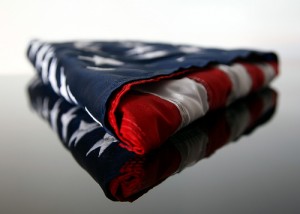 Both of Mr. Bunting’s parents served in the Navy, so when his father passed away, his family received a folded American flag as is customary. (If you’re curious as to what the 13 folds signify, read about it here.) I’ve read about weddings that have a single rose or flower placed on an empty seat for those who have passed, but seeing as how his father was not really a flower guy, I thought it might be more appropriate to use the folded flag in addition to a rose. I do need to run this past Mr. Bunting and his mother for full approval, as I don’t want to draw attention if they would prefer otherwise, but I think it’s a touching gesture.

While searching for creative ways to honor the deceased, I came across a multitude of sentimental ideas for all situations. Some of them are subtle, some of them are not, but  if you’re struggling with ways to honor a loved one at your wedding then you’re bound to find one that speaks to you or at least inspires you.

Prayer: One of the easiest ways to remember those who have passed in a religious ceremony is to include them in the prayer.

Moment of Silence: Including a moment of silence to acknowledge the dearly departed is another thoughtful gesture that can be including in the prayer, after the prayer, or separate entirely.

Remembrance Table: Setting up a memorial table at the ceremony or reception allows you to display a collection of photos and personal belongings or symbols of those who passed.

Candles: If you’re performing the Unity Candle ceremony, both mothers traditionally light a candle to represent their branch of family. After lighting this candle, the widow can break away to light a separate memorial candle in honor of a lost father. You can also have a special candle lit in memory even without the rest of the Unity ceremony. 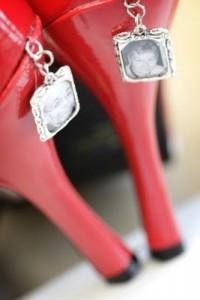 Something Old: Incorporating a piece of jewelry or clothing that belonged to your loved one in your wedding-day attire is a great way to carry them with you. I’ve seen some brides that include a brooch or charm that belonged to their mother or grandmother in their bouquet or wedding jewelry. Don’t have a charm? No problem, you can get a small photo laminated, glued to felt, and woven into the bouquet with ribbon. Or you can sew a piece of lace in the lining of your dress (this can also be a family tradition passed on from mother to daughter over the generations). One bride who had lost her father was still able to walk down the aisle with him with shoe charms that held his photo. I won’t lie, that one really pulls on my heartstrings.

Dance Away: Dedicate a song in memory of your loved one either at the reception or even during the ceremony. Though I personally know I would start bawling, you can even consider walking down the aisle to their favorite song.

In Memory Of: Select a reading or poem that was a favorite of that person to be read during the ceremony. If you feel like a reading would choke people up too much, consider including it in the program with a “In Loving Memory Of” line for people to read at their leisure. 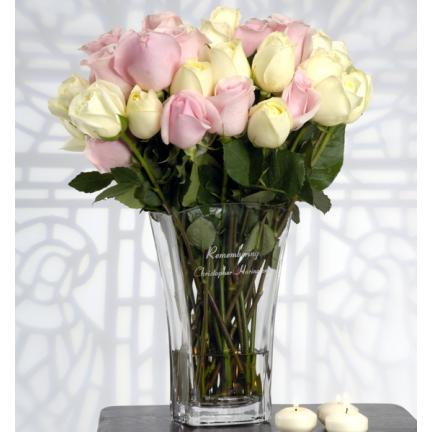 image via My Spiritual Wedding

Remembrance Vase: I found these hand-blown glass vases that can be personalized with an etched phrase or name. These would work as a subtle honorarium piece to include on a Remembrance table or to even hold the bride’s bouquet at the reception.

By the time most of us get married, we have already lost someone dear to us. These are people we grew up with or have come to love, who have helped in one way or another shape us into the people we are today.  While I don’t think you should focus solely on the sorrow of their absence at your wedding (afterall, this is an affair that celebrates new beginnings), I do encourage honoring them in a way that is personal and special to you so that it keeps their memory alive.

If you or your partner has lost someone, are you planning on including them in some way? How are you going to do it?