Warning: Use of undefined constant zframe - assumed 'zframe' (this will throw an Error in a future version of PHP) in /home/veenstra/public_html/wewed/wp-includes/widgets.php on line 413
﻿ Bow ties & Suspenders: all we’re missing is the monocle | We Wed

Bow ties & Suspenders: all we’re missing is the monocle

Tuxedos never really fit into the outdoor ceremony we’ve been planning, and though I was slightly sad I wouldn’t see Mr. Bunting all dressed up in one, I’ve never regretted our decision to avoid the tux. They do look snazzy, but there were several factors that turned us away from them and honestly, they never stood a chance. (We really wanted to embrace the atmosphere of our park, and tuxedos were just too formal. We also had to consider the potential summer heat.)

In the beginning, I had told Mr. Bunting that he could choose what he and the groomsmen wanted to wear aside from a tux (unless he reaaaally wanted them). If they wanted to wear suit jackets, they could wear suit jackets. If they didn’t want to (and I was secretly hoping they wouldn’t), then they wouldn’t have to. Of course they didn’t want to wear jackets for an outdoor June wedding, so it was a win-win situation!

I stayed true to my decision of putting Mr. Bunting in charge for the groomsmen. I let him mull it over. He mulled it over a lot (or perhaps too little). I casually reminded him that we needed to start making decisions for their attire. He mulled it over some more. I began to wonder if he really was thinking about it, or if he even cared, so I started probing him more for ideas and answers. I thought maybe if I showed him some ideas, he’d find something he liked. So I started focusing my google and blog searches on groomsmen attire.

Haha, that’s when it all changed.

I found images that I fell in love with. I showed them to Mr. Bunting.

Let me pause for just a moment to give a warning. Ladies, don’t ever go out of your way to show your partner images of styles you don’t like or styles that just won’t work. There is a very high chance that your partner will take one look, point at that very image, and say, “I like that one!” And that’s exactly what Mr. Bunting did.

I didn’t show him any images that I didn’t like, but I did make the mistake of showing him an image that, while so very cool and awesome, simply did not mesh with the rest of our wedding. It was this one: 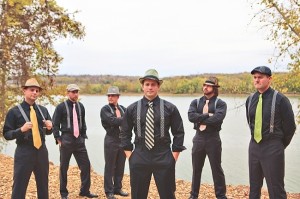 And Mr. Bunting loved it. Le sigh. MOH Bunting and I had to explain to him that it just wouldn’t work with our color scheme or the rest of the wedding’s tone, so I tried to distract him with these: 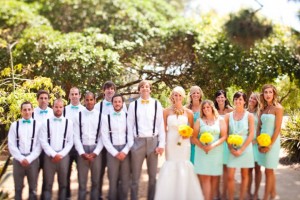 image via Inspired By This / photo by Aaron Shintaku

image via The Bride With A Blog / photo by Bloom Photography 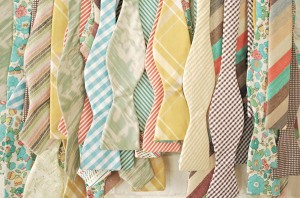 So much for my vow to let Mr. Bunting pick the style! I was in love, and it was with bow ties and suspenders (and Mr. Bunting of course). Now before you judge, Mr. Bunting still had some opinions that I was more than happy to oblige, like no tan or khaki colors.

We had the guys purchase heather grey pants from Jos. A. Banks, and I found coordinating fabrics in colorful seersuckers and cottons for my seamstress to fashion the bow ties out of.  I love the mismatched bow tie look, so each groomsmen will have a different fabric.

We left it up to the guys to buy or find a white shirt and black dress shoes, and Mr. Bunting and I scoured the mall for the suspenders. Kohls had the best selection, and after an hour or so of Mother Bunting, the cashier, and I trying to figure out the best method to get the best deal with all our coupons, we left with 12 suspenders. Okay, okay, I couldn’t decide which style I liked best in the store, so we bought enough of two different types. After seeing them with the pants and a white shirt, this is the one we decided to keep: 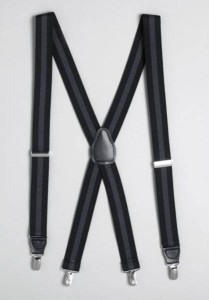 Mother Bunting is amazing with coupons, so after the current Buy 1 Get 1 50% off deal and her coupon skills, we got these Dockers suspenders for about $11 each.

I’m not sure if Mr. Bunting loved the idea of suspenders and bow ties initially, but after actually seeing some of the things come together in person he’s completely on board. I know he wouldn’t agree to them if he didn’t like them at all, so again, it’s a win-win! Besides, Mr. Bunting’s outfit is different than the groomsmen and one he really loves, but that’s for another post.

What are you dressing the boys in? Did your partner have a strong opinion or preference, or did he go with the flow like Mr. Bunting ended up doing?