Warning: Use of undefined constant zframe - assumed 'zframe' (this will throw an Error in a future version of PHP) in /home/veenstra/public_html/wewed/wp-includes/widgets.php on line 413
﻿ The Proposal | We Wed

I won’t get into how Mr. Bunting and I met quite yet, but I will share with you how we became engaged.

It was the night of my BFA Exhibit, the thesis art show I had been working toward for the past 4.5 years since first stepping into the art department as a freshman student. The past six months revolved around this single show: brainstorming ideas and themes, deciding on subject matter, creating the art work, refining the art work, figuring out how to display everything, designing and mailing out postcards to those invited to the reception, organizing food (this is beginning to sound like a mini wedding, isn’t it?), putting my thoughts into words with an artist statement, and making it all come together in a professional manner. Like most thesis projects, if you didn’t do it right then you wouldn’t graduate from the program.

My show, which was a collaborative effort between three other people, had already been on display for a week before a closing reception to celebrate it all. The closing reception was a huge success, with merriment and food and of course, plenty of art. The place was packed with people from start to well-after finish, so I was already on a high with my delight. Our group of friends planned to to head out to a restaurant after the reception to celebrate, so after we got the food cleaned up people started drifting away with the intention to meet us there. I said good-byes to my immediate family (some of whom had traveled from out-of-town) since they weren’t going out with us. Mr. Bunting, who had been my boyfriend for the past 5.5 years, and I were the last to leave. Once I had retrieved my coat and things, he told me he had a surprise for me. My thoughts? He must have bought me a present for finishing my exhibit, how sweet! Instead, he blind-folded me and spun me around multiple times, then lead me down the hall. I was asked to plug my ears, which I did so suspiciously. Because I like the full effect of surprises, I plugged them tight so I couldn’t see or hear anything. I could tell when we went outside, though, because it was significantly colder and I could suddenly feel snowflakes on my face. I could also smell something warm and good, like woodsmoke. This routed my suspicion in an entirely new direction, and my excitement grew as I speculated about what was going to happen. 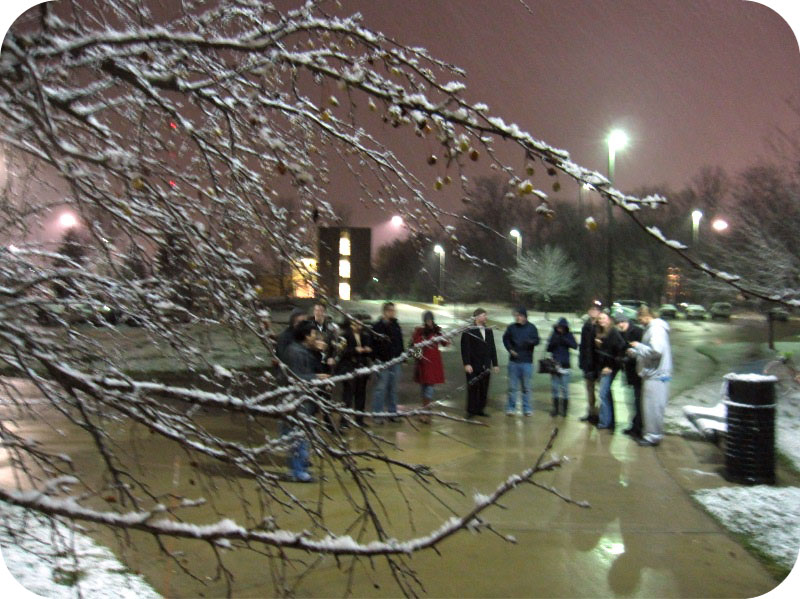 Even my assumptions didn’t prepare me. When I removed the blind-fold, I was greeted by a half-circle of my closest friends and family, all holding sparklers as these huge fluffy snowflakes of the first real snowfall drifted down. 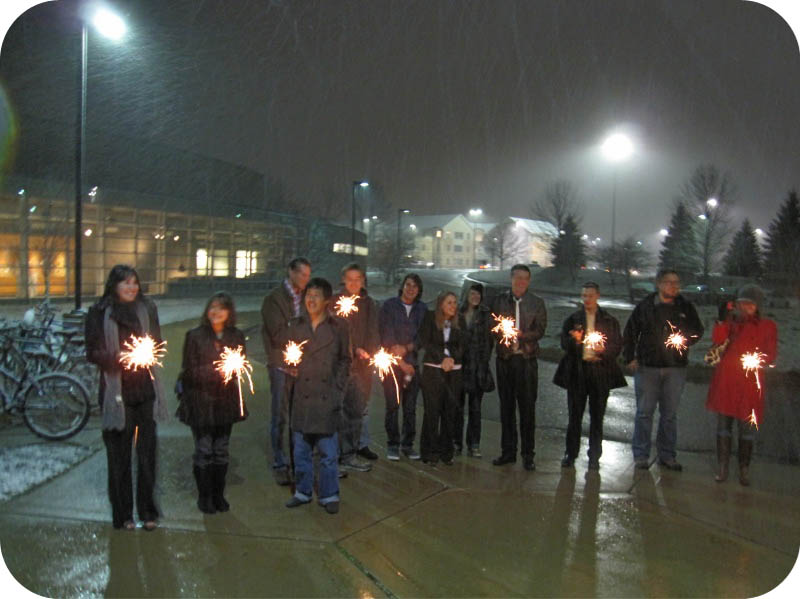 Mr. Bunting got down on one knee and asked me if I would do him the honor of being his wife. I didn’t hesitate for a moment with my answer – YES! And then the bells started ringing from the campus clocktower. No kidding. There were bells. They were ringing. There were actual ringing bells not seconds after I said yes. And it was snowing gorgeous fluffy flakes. It was like all of nature and the world (and the university’s clock tower) was exclaiming YES. 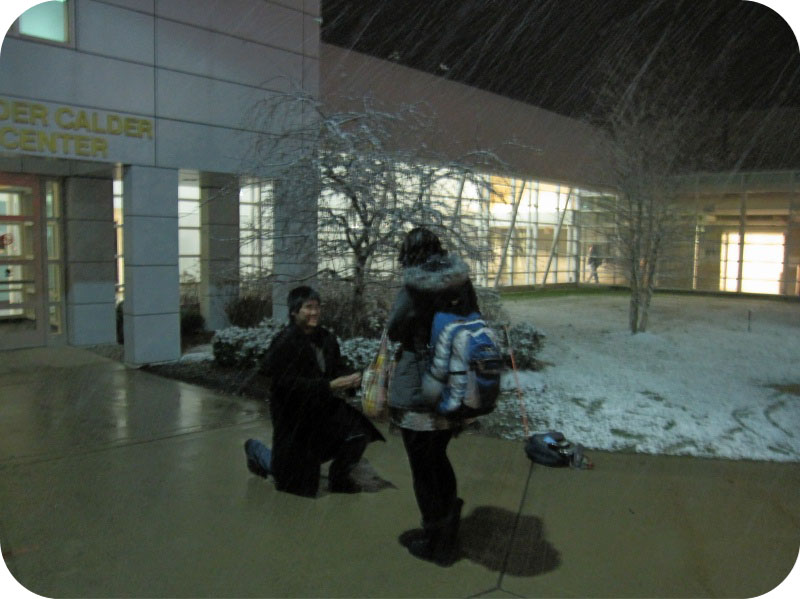 Oh, it was so absolutely perfect! He planned it so well to have everyone there, even out-of-town friends and family, and I had absolutely no suspicions because they were already there for the art exhibit! I was so utterly distracted with the art show that, even though I knew he had purchased a ring several months before, I never even saw it coming. Usually I’m pretty good at figuring things out in advance, but this took me completely by surprise. 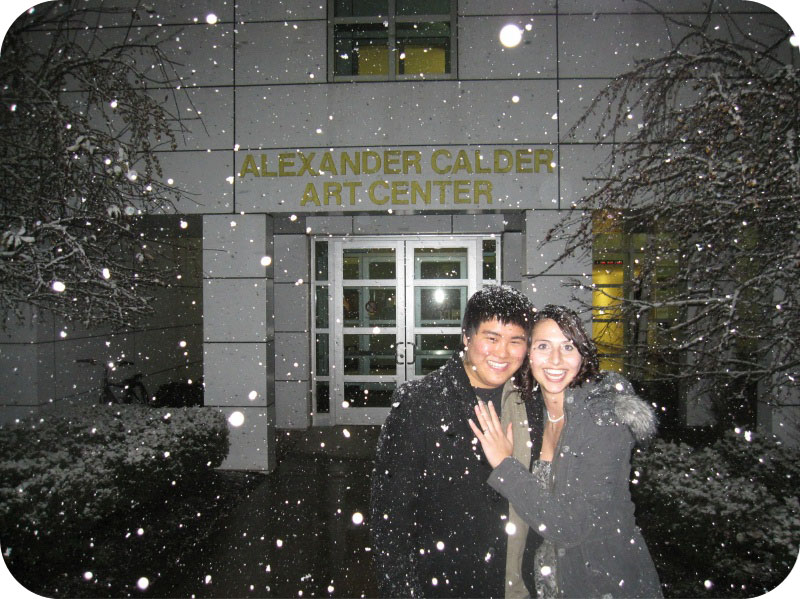 personal photo, right outside the building where I spent most of the past 4.5 years

We still can’t believe our luck with the snowfall and ringing bells, as those aren’t things you can plan or even expect. I thought stuff like that only happens in movies!

Did anyone else have a proposal where everything just sort of came together, even the unexpected? Did anyone see the question coming, or were you oblivious like I was?