Warning: Use of undefined constant zframe - assumed 'zframe' (this will throw an Error in a future version of PHP) in /home/veenstra/public_html/wewed/wp-includes/widgets.php on line 413
﻿ The Bunting Bash: Yeah, Toast(s)! | We Wed 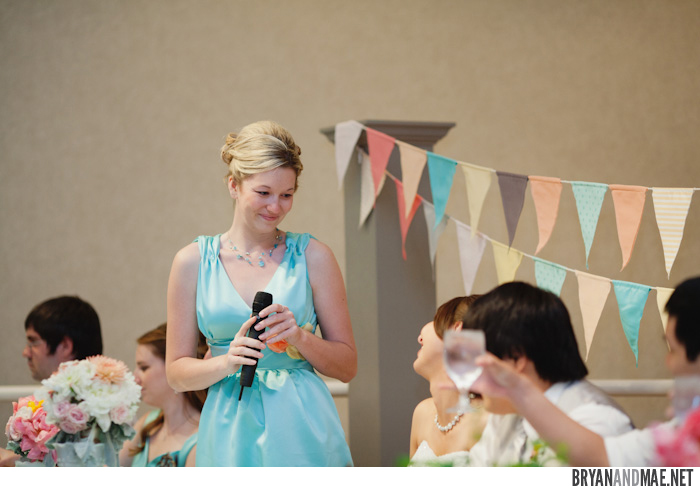 But I knew I was safe on the embarrassing front. Not because MOH Bunting didn’t have any ammo, mind you, she had plenty. But because we’ve known each other since second grade, and she knew, that one day, when she gets married,  I would have the opportunity to be in her position of power, haha. 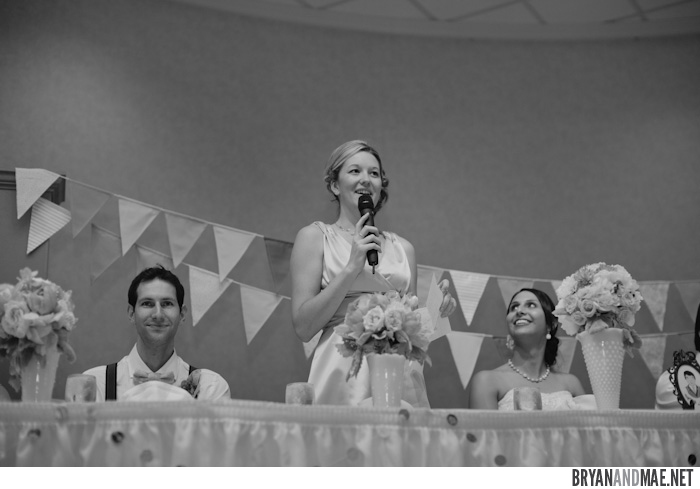 That, and she really loves me. So while her toast had several funny memories, it was above all heartfelt and touching and made me go ‘awwwwwwww’. She is so beautiful. 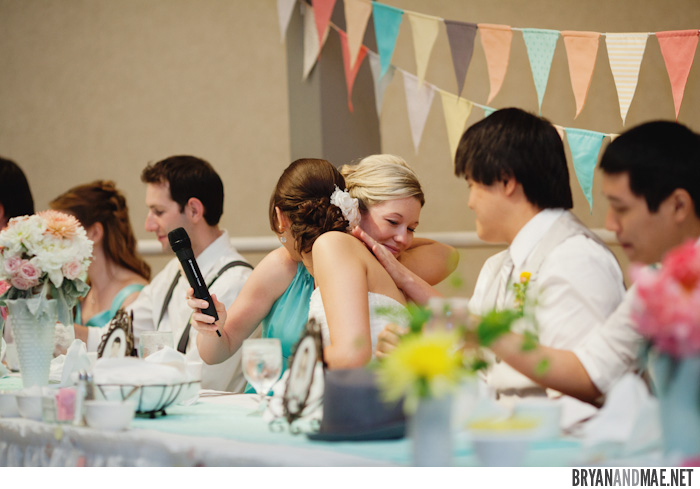 Her kind and beautiful words made Bestman Bunting weep with the pressure to follow-up with his toast. 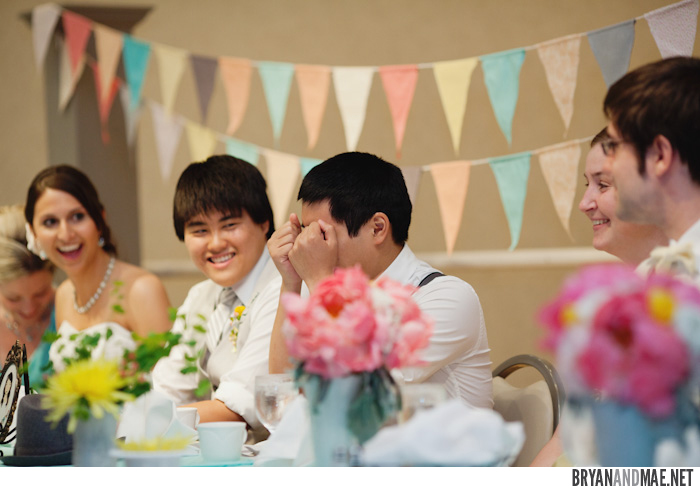 But he was prepared, and began in earnest. 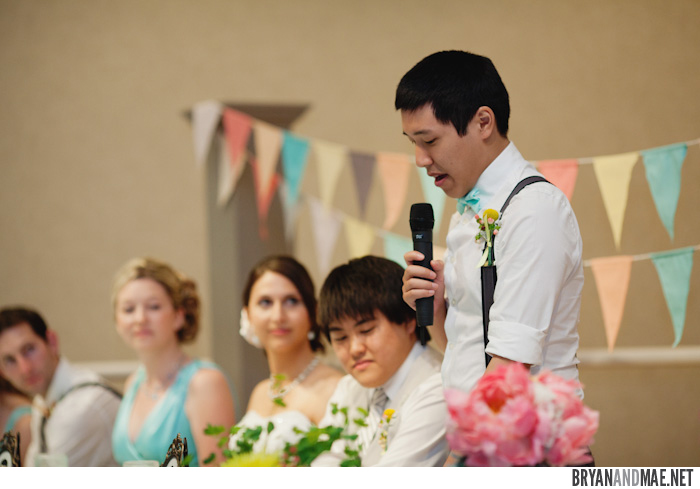 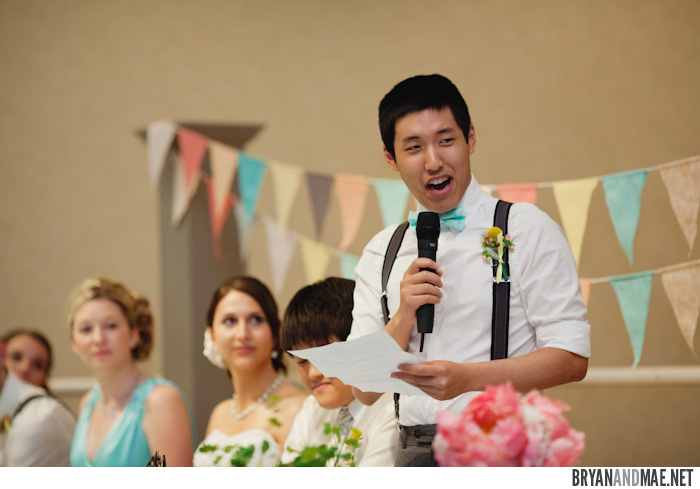 “To Mrs. Bunting…. The beautiful, wonderful, and talented Mrs. Bunting. I remember one of the first times you came over to our house, you saw me polishing off a gallon of vanilla ice cream. I bet you weren’t thinking to yourself that day, ‘That stunning young man is going to be my future brother in-law.’

But I would like to take this moment to say: you’re an amazing person, Mrs. Bunting. You’re always there for your friends and your family. I have only known you to help, not hurt. Since you and Mr. Bunting have been together, I always knew in the back of my head that you two were perfect for each other. And hey, if Mr. Bunting and I haven’t driven you crazy, then you must possess some special power that no mortal woman does. 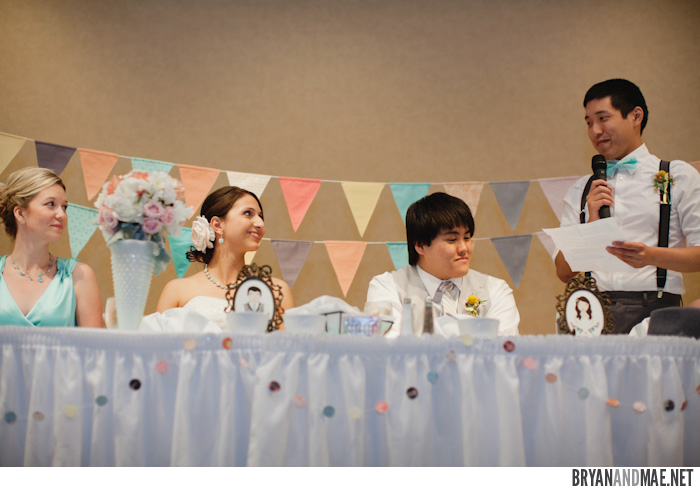 Mr. Bunting was not let off the hook so easily. 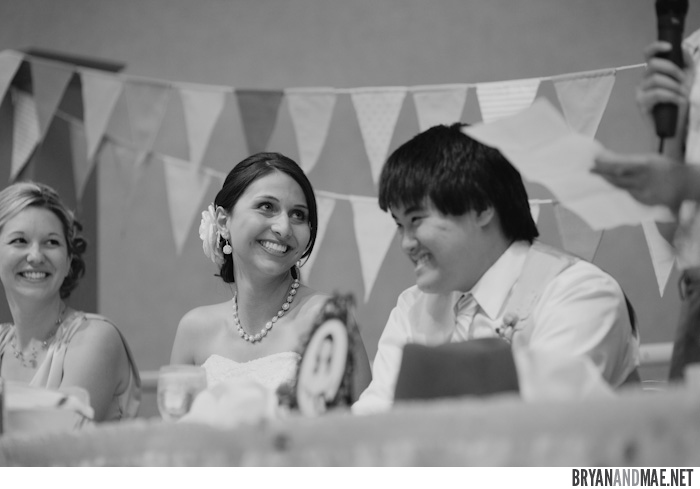 “I’d like to tell a story about a little boy who climbed on top of the roof of a two story apartment building. Now the details as to WHY he was climbing are beyond my memory. But I do remember that there was no chance in talking him out of doing whatever dumb thing he was thinking about doing. And to my utter surprise, he jumped off the roof, landed in a garbage can full of leaves, which then proceeded to fall over, roll, and hit a fence. Luckily the boy inside was fine. You’re probably thinking that there can’t possibly be any moral to this story, but I’m going to try my best to come up with something.” 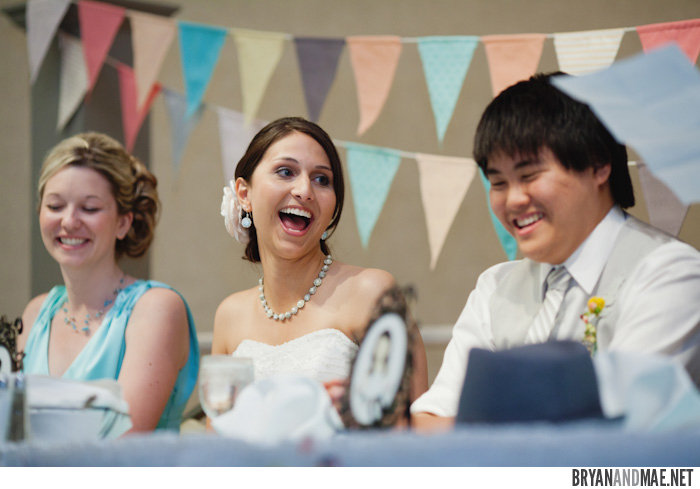 We all thoroughly enjoyed this story, though Mr. Bunting could only wonder if this was really happening. 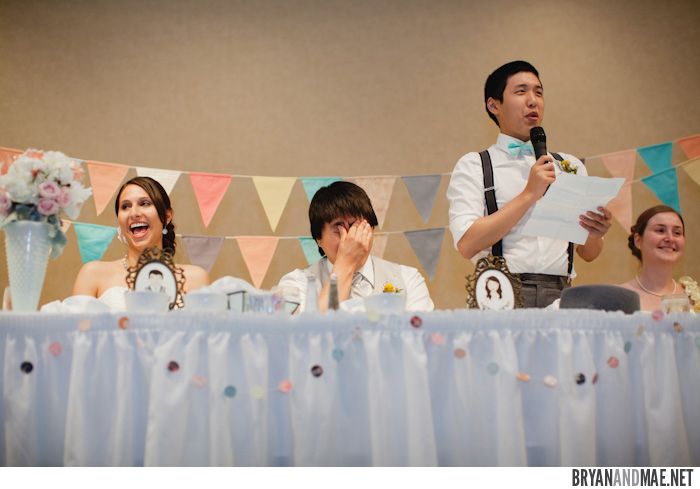 “Mr. Bunting, EVERYONE knew that you and Mrs. Bunting were going to get married, we all saw it coming for a long time now. But what I also see here is your final leap into the real world, just as I thought jumping off our roof was your final leap. But this time, your decision is more well-planned, and instead of a garbage can full of leaves, you have Mrs. Bunting to help catch you.” 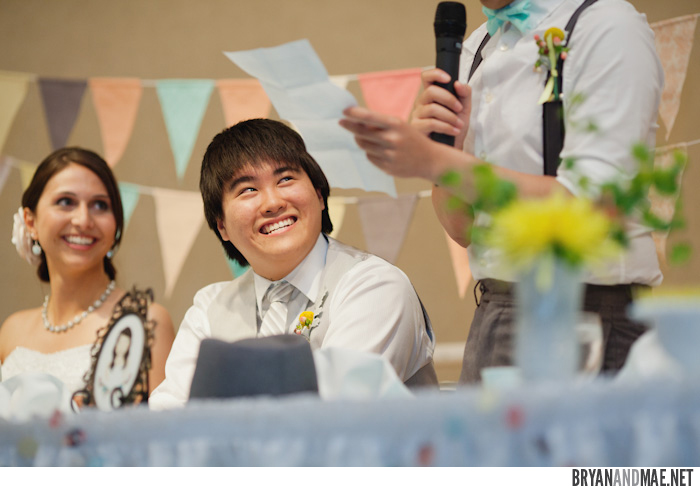 Then Bestman Bunting chokingly acknowledged their  father, who had passed away three years ago. Within seconds, there wasn’t a dry eye in the place.

“Dad would be proud, and I know for a fact that he wouldn’t have wanted anyone else to be his daughter-in-law. I’m sure he would have a million, cheesy one-liners to say about this joyous occasion…” 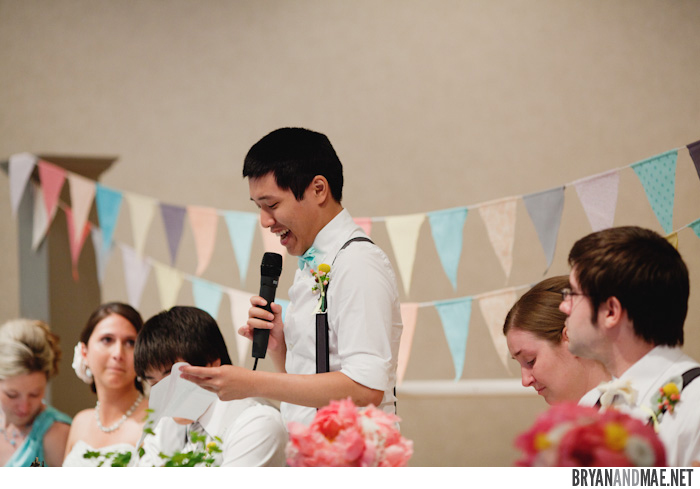 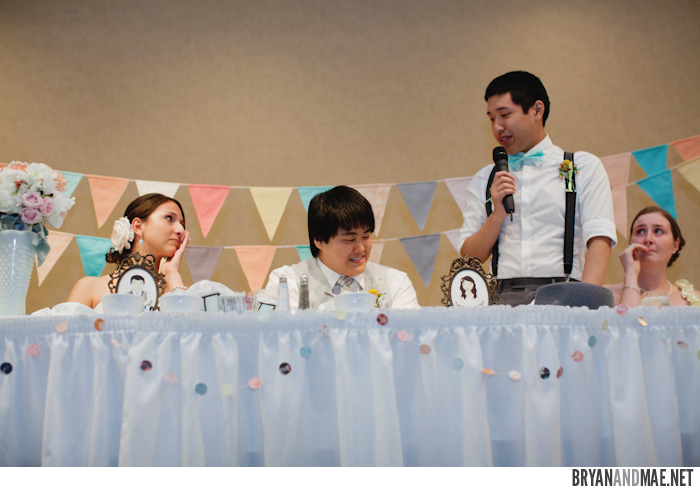 But he couldn’t end on a sad note, so he had one last joke for us.

“But I’ll just leave you with my own piece of advice: no matter what happens, always remember to hold her hand…otherwise she’ll go shopping.” 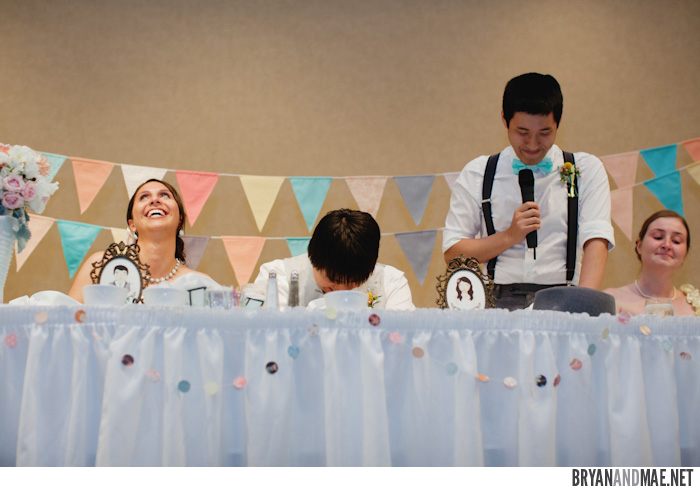 Daddy Bunting had one more brief toast for us , which he followed with a sweet prayer. 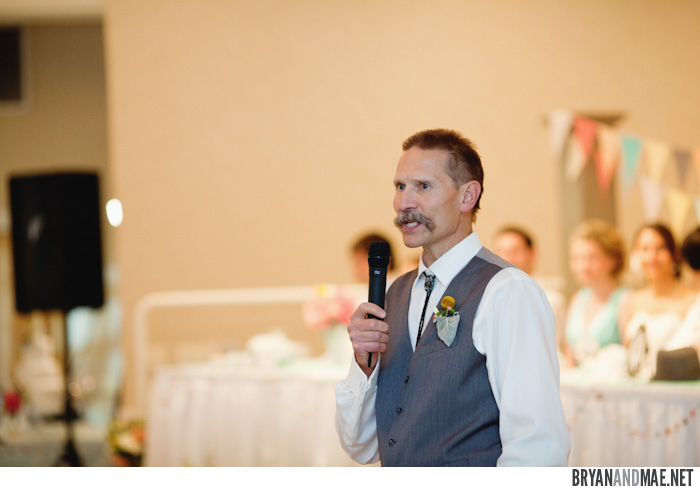 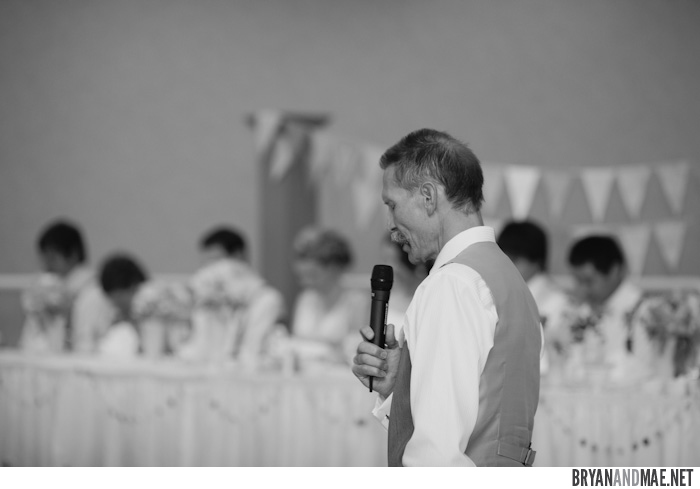