Warning: Use of undefined constant zframe - assumed 'zframe' (this will throw an Error in a future version of PHP) in /home/veenstra/public_html/wewed/wp-includes/widgets.php on line 413
﻿ This jam, it is mine. | We Wed

This jam, it is mine.

Let’s be honest, Mr. Bunting and I don’t always agree on musical tastes. I can be a little bit country, he can be a little bit in-your-face-with-the-screaming punk alternative rock. Seriously, some of the things that blast out of the stereo when I borrow his car has all of my Senses Fail-ing alright. Okay, okay, so I do enjoy several Senses Fail songs, but the majority of Mr. Bunting’s music involves rocking bass that rocks my head a little too much and throats that I swear must have callouses from all the screaming. I’ve since learned to turn the volume down before the sound kicks in lest I end up like this: 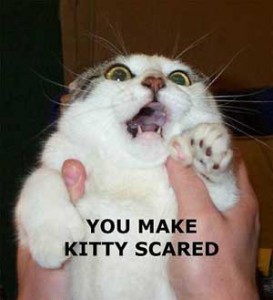 I’m pointing a finger at our different up-bringings for this. My dad listens to country and bands like Jackson Browne. His dad listened to bands like The Ramones and punk rock like Rancid and Sex Pistols. But then Mr. Bunting and I met, and it was such a great love that we only focused on where our tastes did cross (musical tastes, not tastebuds. Geez, we didn’t make out all the time). That, and I was so hooked I’d give anything he listened to a try because he liked it, I liked him, and by proxy I liked what he liked. That was my high school girl mentality. It was so strong that our first concert together was Norma Jean (I don’t think I could understand a single word that was screamed, but I had a blast nonetheless).

Truth be told, even though I don’t particularly enjoy some of Mr. Bunting’s bands, he has introduced me to a lot of bands that I absolutely love. Before Pandora came along, I relied heavily on him for new sources of music and he always delivered. He introduced me to Paramore (before the radio discovered them), Anberlin, Mae, and Innerpartysystem. Hoo, do I love me some Innerpartysystem. (I swear I’m going somewhere with this, though, so just bare with me.)

So while we do share some common musical interests, we both have strong(ish) opinions about the rest of the music we enjoy individually, and hive…  I have no idea what type of music our reception will have. (See, I told you there was a point to all of this!)

I would love some country songs because that’s what I grew up on, but he still hasn’t grown accustomed to “the twang”. We both love electronica and techno, but let’s face it, not everyone can dance to that without the glowsticks and strobe lights. And the screaming artists that are his favorite? Our guests just don’t share the same musical palate and would be running for cover!

Well then, what about including some popular dance and R&B songs for people to groove to? Oh, I didn’t mention that Mr. Bunting refuses to listen to the radio just to avoid all of those mainstream songs? Why yes in fact, when I borrow his car and he’s forced to take mine, my car is returned to me with the radio turned off because he would rather listen to silence. Oh, silly, silly boy.

So our only solution is to play Journey all night long, because “Don’t Stop Believing” is totally our jam. 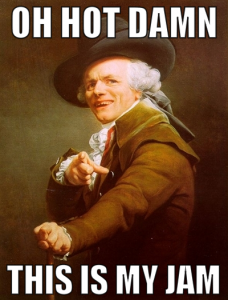 Okay, not really, though I don’t think I’d ever get sick of that song.

Realistically I won’t have to worry that much because our DJ will be reading and catering to the mood of the crowd, but as we work on our must-play and do-not-play list, music is a current concern for me. It’s important to me that our wedding embraces the individuality of both Mr. Bunting and I, and music plays such a large role in his life that I don’t want to tell him to just “suck it up and deal”. I also, like most any bride, want everyone to have a blast on the dance floor, but how to accomplish this is beyond me. How much country can we get away with to satisfy my western roots without sending all of our country-hating friends for the hills (cities)? Can we slip in some techno and electronica, or will the older generations cringe? Just how do you please such a diverse group of musical tastes? Just what is it about Journey that brings people together? Wow, I just asked a lot of questions, and I don’t have an answer for any of them. I guess we’ll just do our best to come up with a balanced mix and then find out at the reception!

Is anyone else facing this dilemma of varying musical tastes between you and your partner?