Warning: Use of undefined constant zframe - assumed 'zframe' (this will throw an Error in a future version of PHP) in /home/veenstra/public_html/wewed/wp-includes/widgets.php on line 413
﻿ Ring around the research | We Wed

Ring around the research

We bought Mr. Bunting’s wedding band a few days ago, and I secretly think I am much more excited for its arrival than he is. Not because he’s not excited to marry me, mind you, but because it IS a piece of jewelry, and well, I like shiny things. Enough said, right?

Finding the right band took some time and research on our part. I’m definitely not the type of person who can walk into the first store, pick something out, and make a decision without considering my other options. Especially when that something is as important (and pricey) as a wedding band. We originally were going to get a ring made of Damascus metal from an artist online, but we both decided we’d like to have the customer service and warranty offered through a well-established jeweler, who we knew would be around in 10 years in case something happened to our ring. There are some VERY neat rings out there. I’m talking zebra-swirl patterns, wood or water buffalo horn inlays, and even rings made from meteorites! But, again, we needed to think long-term durability for the ring we’d say our vows on.

So Mr. Bunting and I went to every jewelry store in the area to learn as much as we could about the options as well as to see all the designs available. The design was up to him, but I took it upon myself to research the different properties of metals and non-metals so we would end up with something that fit us.

I am by no means claiming to be an expert, but here is my understanding of some of the contemporary metals/non-metals (and gold) that are becoming more and more popular.

image via Engagement Rings Plus

Gold would have been our top choice, but with the current market prices it is something we just simply cannot afford.

Benefits: Aside from it’s aesthetics, rings made of gold can be re-sized again and again. This is great, especially if he loses or gains weight down the road.

Disadvantages: Expensive! It will also scratch. It can be polished, but every time it’s polished you’re losing a tiiiiiiny bit of the surface. It is also malleable, meaning over time it’s likely that the band will wear thin (this can be fixed by adding a ‘shank’) or become misshapen.

Every jeweler we talked to said they would never recommend titanium because of how easily it scratches. One even said you could buy a new scratch-free ring, and by the time you got out the door, it would be scratched already. Obviously this is a bit of an exaggeration, but we threw this option out the window right away. Stainless steel was also discouraged because it scratches easily as well. Granted nothing is scratch-proof, but the stories we heard were enough to make us keep looking at other options. 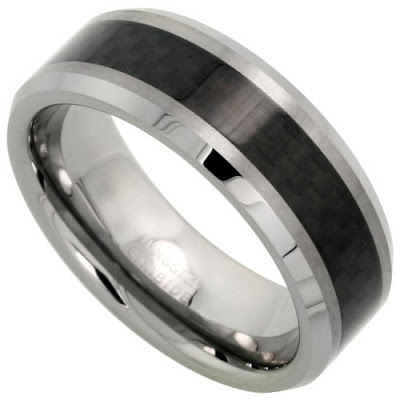 Tungsten carbide is one of the more popular contemporary metal choices right now, and I’m sure a lot of you know someone that has one. I originally thought we would get a tungsten carbide ring for Mr. Bunting, but we both quickly changed our mind when we read up on it a little more.

While it comes in many designs and three colors (white, gray, black), can be inlaid with other materials, and is VERY scratch resistant (but not scratch-proof), the drawbacks were just too much for us. Tungsten carbide is very, very hard. Combined with it’s high scratch-resistance, it was originally advertised as being indestructible. This is FAR from the truth. Because tungsten carbide is so hard, it has little flexibility. So if enough pressure is applied at the right point(s), it will shatter. In case of an emergency, you can actually use pliers to break it off. Unfortunately, this brittleness means that if its wearer drops it on a hard surface, like the locker room floor or a marble counter, it could very well break or chip. If you buy your ring from an established jeweler, they may offer replacement warranties. This means you have to send in the fragments of your old ring and you’ll get a brand new one, but it also means bye-bye to the ring you said your vows over.

Mr. Bunting and I didn’t like the idea of his wedding band shattering if accidentally dropped, but it really is a personal decision you’ll have to make. It’s great that it’s so scratch-resistant, but if you YouTube tungsten carbide rings shattering, you’ll see just how fragile they can be.

Benefits: Very affordable (you can find rings as low as $20), scratch-resistant, many designs and styles to fit every personality.

Disadvantages: It is brittle and will shatter or chip if dropped on a hard surface, cannot be re-sized.

image via My Jewelry Box

I believe ceramic rings are a newer trend. The majority we saw were black, but they can be made in pink as well. Y’know, in case he absolutely loves pink.

Ceramic rings are not, as one may initially think, created through the the same process as ceramic tiles or pottery, so don’t let the name fool you into thinking this will break at the slightest touch. However, like tungsten carbide, they can still potentially chip if dropped. My understanding is that they are not quite as scratch-resistant as tungsten, and I’ve heard mixed reviews about whether they’re more or less breakable than tungsten.

One jeweler we talked to had his own wedding band made of this, and he loved it. His ring was three years old at the time, and wasn’t scratched at all. However, another jeweler we talked to wouldn’t recommend it for a wedding ring just because there wasn’t enough information about the material for her to look us in the eye and say, yes, you will be satisfied with this ring.

Black ceramic was a top choice for us because it looks so neat, but we just didn’t have enough information to feel comfortable with it as Mr. Bunting’s wedding band. If we were shopping for a casual ring, though, I would definitely buy something made of black ceramic.

Benefits: These rings are SUPER light weight! It honestly feels almost as light as plastic, which is great if he hates the feeling of something on his finger. The color is throughout the entire material instead of just a surface coating, so if it does scratch, it will only reveal more black instead of  silver or white. They are affordable, and come in some very sleek and modern designs. They are also scratch-resistant.

Disadvantages: Still has the potential to chip or break and cannot be re-sized. Black ceramic has been used widely in men’s watches, but seems to be relatively new in the wedding band industry. Hence, there is little out there about its overall durability as a wedding ring.

You may see these popping up more and more at different jewelers. We saw them under the names Brute Cobalt, Brawn Cobalt, and Armor Cobalt, but they’re all the same thing (just slightly different design lines depending on what jeweler you go to). The process is patented by Scott Kay, an American jeweler who absolutely hates tungsten carbide for use in wedding bands (just visit his website and you’ll find those shattering videos I was talking about). I thought I heard that cobalt can be found in other rings as a sort of additive material, but these cobalt rings are only made by Scott Kay since it’s a patented process. Because I don’t know how any cobalt-additives (if they exist) compare to Scott Kay cobalt, we stayed away from rings that weren’t officially SK.

Cobalt is moderately scratch-resistant. Not as much as tungsten carbide or black ceramic, but definitely more-so than gold. It will not bend or shatter/break. You need to use a diamond-tip blade to cut it off, but more and more Emergency Rooms have these on hand.  It cannot be re-sized, but it is a very bright white color that won’t tarnish.

For those with skin sensitivities, it is hypoallergenic. In fact, cobalt is even bio-compatible, meaning it lives in harmony inside the human body and has been used in the medical field for such things as joint replacements.

Benefits: Made in the USA (for those who want to avoid any conflict-jewelry), will not bend/break, bright white in color, scratch-resistant and durable.

Disadvantages: Cannot be re-sized, limited only to the white color, also limited to Scott Kay’s designs so no fancy black inlays.

There is no “perfect” wedding band material. None of them, despite what anyone tells you, are 100% scratch-proof, and tungsten is definitely not indestructible. So, after going from one material to another, we finally settled on our decision: SK Cobalt. We liked that it wouldn’t shatter if dropped, was still scratch resistant, and was whiter than white gold. It was also still within our budget, and even though there were no really neat inlays offered, we purchased a ring that we both loved and, more importantly, were confident of.

Did anyone else find themselves learning more about metals and non-metals when searching for the right band? Did your findings surprise you at all? Any other interesting tidbits I may have missed? I thought for sure we’d end up with tungsten going in to it, and I was a bit shocked to learn it wasn’t as durable as I thought. I know most men do not wear the same wedding band their ENTIRE lives, but I’d rather upgrade it with an anniversary ring than replace it because it shattered.